As many o’ parents have learned the hard way, the earlier a child learns the value of money, the better. Even in a family with seemingly unlimited means, you’ll do your kids no favor by letting them think money grows on trees. Not only would they become entitled, they’d miss important life lessons on delaying gratification, goal-setting, and responsibility.

When is the right time to start introducing money concepts to children? Experts generally agree that by five or six years old, children can begin to grasp basics such as coin values, counting, and prices of small things they want. As kids grow and mature, financial lessons come with higher stakes—with much to gain besides material possessions.

Little humans benefit from feelings of accomplishment, security, and independence when participating in our economy. This translates to other important areas of their lives where they will need patience and planning skills.

When I think back to one of my earliest purchases, the feeling of empowerment still comes to the surface. I used gift money to purchase a little pink cassette player from a catalogue. The experience was so satisfying that it prompted me to join the workforce at 13 years old, and I’ve never looked back.

Wondering how to raise a productive member of society? I’ve crafted some do’s and don’ts after interviewing Planswell’s money experts, a few accomplished team members, and some inspiring parents. Read on if you’d like to retire someday rather than bankroll adult children.

Do: Let them experience spending

To pique their interest, your little ones need a taste of the good life. As early as elementary school, they should have the opportunity to spend money. It’s time to introduce the concept of allowance, chores, or gift money. For this lesson, it’s not as important where the money comes from as it is for them to feel empowered by it.

It may seem strange to gift a young child cold, hard cash instead of a beautifully wrapped toy, and they might even seem disappointed to receive it. That is — until they experience what they can do with it.

There is no need to go overboard and break the bank to finance Richie Rich. Keep the economies of scale in perspective. A couple bucks in a candy shop is a thrill, even for me as an adult.

My colleague Isabel shared an early memory of spending that reminded me a bit of my pink cassette player. She brought her entire life savings from babysitting, allowance, and birthday money on a family trip to New York City. She recollects feeling “cosmopolitan and sophisticated” when she forked over all of it for an expensive pair of shoes in the Big Apple. The feeling was so intoxicating and the memory so cherished that she still has the shoes decades later.

Early experiences like these can inspire young people to imagine the adult life they want and motivate them to earn and save towards financial freedom over the course of their lives.

Don’t: Make financial decisions for them

As parents, we might cringe watching our kids overpay for designer shoes or impulsively buy some useless crap they just have to have at the moment. We must bite our lips though.

Another colleague, Meagan, told me about her parents requiring her to tithe a portion of her allowance to their church—until they didn’t.

She received $1.50 per week for allowance, with the understanding that 50 cents would be tithed. For her religious parents, tithing was clearly a lesson in values. Of course, instilling values in our children is an incredibly important obligation as well, so what’s a parent to do when a child wants to spend the money her own way?

Meagan put her parents to the test when she came across a coveted My Little Pony at a garage sale, priced at exactly $1.50. She asked if she could use the tithe portion to afford the toy. Her mother no doubt wrestled with this question before ultimately allowing Meagan to make her own decision. Tough call, but to truly learn the value of money, we must feel the independence it provides and face the tough choices that come with a budget.

Meagan became the proud owner of that My Little Pony. She may have failed the values test, but her mother definitely passed a test of her own by allowing her this freedom.

Do: Let them experience buyer’s remorse

Making good decisions comes with a learning curve. Sometimes, the most valuable lessons are learned the hard way.

“When I was about six years old, my parents really didn’t want me to waste my allowance on a light-up fighter jet from the impulse aisle,” recounts my friend Sam, “But I threw quite a fit and left with the jet. Within 10 minutes, it was in pieces all over the floor. So yeah, I learned the value of money that day.”

It breaks our hearts as parents to see our children disappointed, but we can’t succumb to the urge to eliminate life’s disappointments for them. In fact, much of their lifelong emotional health depends on their ability to accept disappointment. That’s the secret sauce that enables us to overcome adversity and reach our full potential.

Don’t: Indulge their every want

We all love seeing joy on our children’s faces. That makes for a strong temptation to buy them whatever their little hearts desire. Even if you have the means to afford all of FAO Schwartz, use some restraint. Kids and young adults will never appreciate the value of money if they never NEED money. You’ve already learned this the hard way if you’ve ever tried to pay an entitled teenager to help with an extra chore — “nah,” they say, uninterested in putting in the work for some quick cash. If you’re financing their every want, you’ll be disappointed when they don’t seem to have much of a work ethic.

“I was really into superheroes when I was a kid and started collecting superhero cards,” said my teammate Lukasz, “I wanted more and more packs, so I expanded my paper route. That’s really the first time I realized you can buy more stuff if you work harder.”

Keep this in mind the next time your child mindlessly reaches for a small reward in the checkout line. Although you can easily afford a pack of gum or superhero cards, your child can’t afford to miss learning the value of a dollar.

Do: Encourage saving for a big purchase

One of the most important money lessons your child will need to learn is saving. Learning to delay gratification will serve them over and over throughout every aspect of their lives.

In middle school, my colleague Vanessa bought a pink sweater she saw hanging in a specialty shop. “I walked by there every day and thought, ‘I want that sweater,” she recalls, “I cut grass, I shoveled snow, and I babysat. I made about a dollar an hour, but I managed to save up the $70 to buy it. I think I wore it every day for like a year. It was awesome.”

Had mom and dad sprung for the sweater, Vanessa may not even remember it today. Earning it the hard way gave it more value, even all of these years later.

Don’t: Subsidize what they can afford

Another temptation we struggle with as parents: upgrading our kids’ purchasing power. They’re working hard to earn something and it’s a painfully slow process. Wouldn’t they love it if we topped off the fund so they could buy something better, or make the purchase faster? Not so fast.

Clover, a happiness hero at Planswell, survived her teen years without a smartphone—an unimaginable feat in the minds of my own teenagers. “I was the only person in my whole cohort who had a flip phone,” she said, “All of my friends had iphones, but I only had $100 saved. The flip phone worked just fine, but it taught me that I’ll need to save longer to afford better things.” What a novel idea.

Our interference will rob them of all of the important lessons they’re learning. Hard work, the value of a dollar, delaying gratification, spending limits, realistic expectations, independence …everything is at stake.

Do: Let them experience earning

Young adults have much to gain from entering the workforce as early as they can—not the least being responsibility, self-worth, and maturity. It’s hard for me to imagine, but not all parents allow their kids to work a part-time job. Some want them to focus on their academics, help with younger siblings, or concentrate on athletics. To those parents I say: managing multiple priorities is an invaluable life skill. Every child is different, but many will prove they can handle it if given the chance.

A young man I know begged his parents for permission to apply for a summer job (“Dad, it will be good for my future!”), his dad firmly shut down the idea, “Your future is in your golf swing.” Cringe. It wasn’t. Not only did he not play postsecondary golf, he’s still struggling with the transition to adulthood in his late 20s.

Most of us need to start our professional lives at the bottom in entry-level positions. Work experience helps us get the next, better job, and so on. If all goes well, we keep working our way up to more lucrative opportunities. Delaying on-the-job experience means delaying better opportunities.

The enterprising teenager will also get an invaluable business education from a job. More than a couple of my colleagues saved and learned enough from their first jobs to go into business for themselves. Nick used his tire store earnings to buy DJ equipment. Abdullah dealt in Pokemon cards. Scott saved enough from his paper route to buy a modest, revenue-generating boat. That was just the beginning of Scott’s entrepreneurship. He went on to launch several more projects and co-founded Planswell.

To make your kids’ entry into the working world a smashing success, their first paychecks should be gratifying. If you’ve been slipping them a twenty every time they lift a finger around the house, your generosity could backfire when they don’t feel empowered by their first real paycheck. Ideally, payday should come with more purchasing power than they’re currently accustomed.

“I worked for tips at my sister’s snackbar one summer,” said Craig on our team. “I worked the entire summer and at the end of that summer, she took me to a record store. The only thing I could afford was one cassette tape after working an entire summer. I bought a Crowded House cassette tape, and I played the living crap out of that.”

Thankfully, it was worthwhile for Craig to show up for work all summer long. Had cassette tapes come easier for him in the past, he may have taken a pass on working for a living. And that’s the end-goal when it comes to teaching our kids the value of money. We want them to support themselves someday, afford things that make them happy, and—if you’re Meagan’s parents— maybe even tithe some to the church

Are you ready to invest in your future? 8 Simple Resolutions to Improve Your Finances

It’s very easy to get caught up in life. We postpone or forget things we promised ourselves we would pay […] ‘Tis the season to fire up the mower, put on your headphones, and enjoy a podcast while cutting the grass. […] 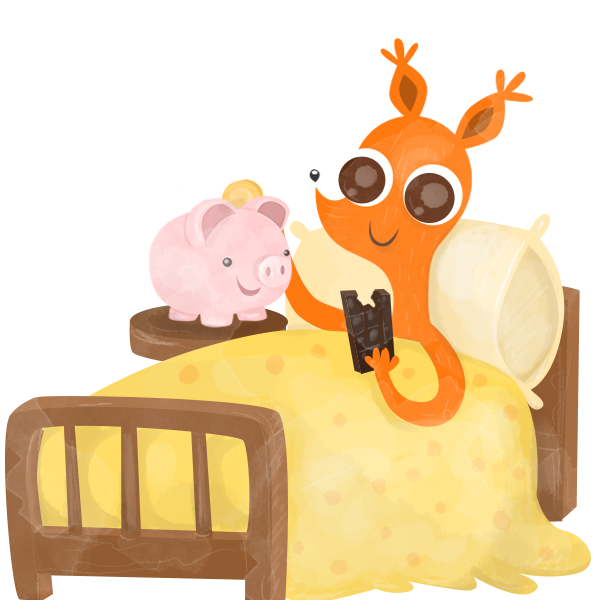 Even Cheapskates Splurge on These 19 Things

Even Cheapskates Splurge on These 19 Things.